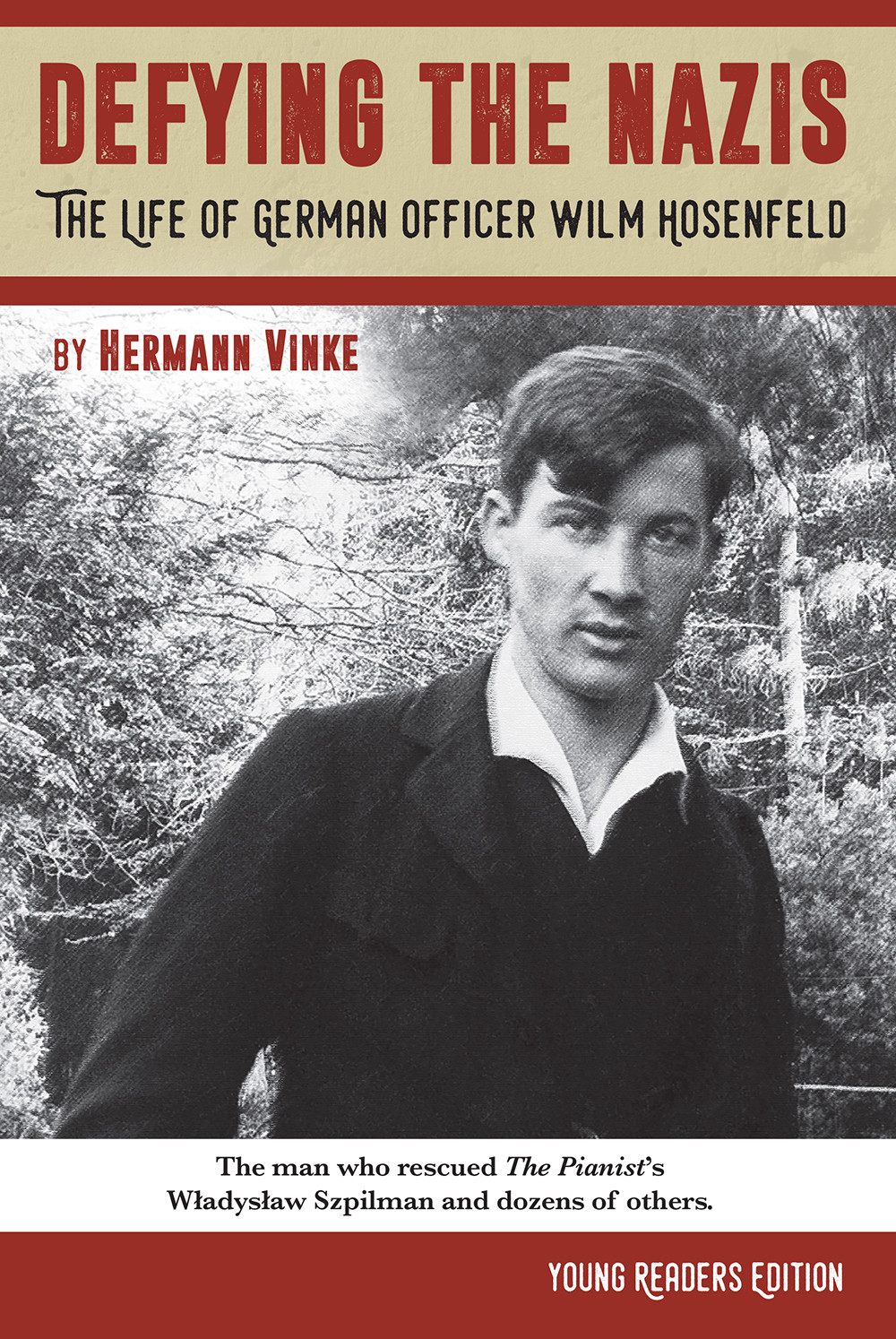 Defying the Nazis: The Life of German Officer Wilm Hosenfeld

Initially an ardent admirer of Adolf Hitler, Wilm Hosenfeld became aware of the Third Reich’s relentless brutality when he, a captain in the German army, was stationed in Poland. Witnessing Nazis’ the inhumanity changed Hosenfeld from an enemy occupier to a rescuer.

Includes historical maps, as well as a glossary, timeline, character list, and a full index.

CURRICULUM CONNECTIONS Biography, empathy, family, moral consciousness, recognizing different perspectives, identifying cultural and ethnic values and their impact, making connections between our own lives and the lives of others and the world at large, WWII, Holocaust, important historic events, narrative accounts of world history

The name Wilm Hosenfeld came to fame in connection with the 2002 movie, The Pianist. Hosenfeld, a Nazi officer, saved Polish-Jewish pianist Władysław Szpilman’s life. This edition for young readers is translated from a German book for adults, and it frames Hosenfeld as a caring, passionate Catholic teacher who became disillusioned with Hitler and the Nazi regime although receiving numerous promotions for his organizational abilities. When stationed in Warsaw, Hosenfeld discovered Szpilman in an abandoned building about to become inhabited by the German army (Wehrmacht) in 1944. Vinke effectively shows Hosenfeld as the antithesis to his colleagues who reveled in the tortures perpetrated against Jews and Poles. Through journal entries, Hosenfeld’s letters home to his beloved wife and children, photographs, and gripping narrative, Vinke presents a man out of place in a Nazi officer’s uniform, a man who took it upon himself to learn Polish, hire Polish workers, and save as many Poles and Jews from execution as he could. Hosenfeld was captured by Soviets in Warsaw in 1945 and remained a prisoner of war in the Soviet Union until his death at the age of 57 in 1952. Hosenfeld earned a place in Yad Vashem’s Righteous among Nations in 2008.

The category of perpetrators is a complex one, and it is imperative for young readers to understand that not every Nazi killed, making this an important addition to a Holocaust library. Ample back matter includes a glossary, list of characters, timeline of events, further reading and websites. Note, though, that some information presented as fact, such as the timing of the establishment of the Lodz ghetto, is not correct.

The first biography in English of a conflicted, quietly heroic German officer stationed in Warsaw during World War II who saved dozens of people from the Nazis.

Wilm Hosenfeld kept a journal and wrote copious letters home both during the war years and, later, as a Soviet prisoner of war. These became the foundation for this young readers edition, translated from the German, of a work for adults. Through excerpts of his writing, readers gain an appreciation of Hosenfeld's opinions of German conduct in Warsaw. Avoiding any whitewashing, Hosenfeld is shown in all his nationalistic fervor but also as a decent man who had a basic respect for all his fellow beings and one increasingly appalled by Nazi policies; the occupation "has degenerated into excessive, inhuman, mass slaughter contrary to the ideals of a cultured nation . . . the inhuman treatment can never be justified," he wrote. What we couldn't put in his journal was the aid he rendered to dozens of Jewish and non-Jewish victims of Nazi tyranny, most famously Wladyslaw Szpilman, subject of the movie "The Pianist." In 2009, Hosenfeld was named one of the Righteous Among the Nations by Yad Vashem. Solid writing and photographs throughout bring the story of this complex individual to life.

Hosenfeld wrote, "I only see a person in front of me and a boundless compassion overcomes me"; this work is a fitting tribute.

German Captain Wilm Hosenfeld is most known for helping to save the life of Wladyslaw Szpilman, an extraordinary pianist (subject of the movie The Pianist), who survived the Holocaust partly because of Hosenfeld's actions. Vinke compiled this work largely from Hosenfeld's private letters and journals, which revealed a man who, despite joining the Nazi Party, was ashamed of his nation, had doubts about the German outcome of hte war, and was unable to comprehand the reasoning behind genocide and carnage. While Hosenfeld was stationed in Warsaw, Poland, he helped Jewish and non-Jewish Polish citizens survive and evade capture. When his unit surrendered to the Soviets, Hosenfeld was held in a POW camp where he died in captivity. the book, translated from the original German, details a number of significant milestones in the Hosenfeld's life and depicts him honestly.