Thanksgiving is just around the corner, and many people are already planning what to cook for their dinner spread. While feasting and giving thanks this season, consider the true origin of this long-standing tradition. The idea of Thanksgiving has changed quite a bit in the few hundred years it has been around, but how did it become the ingrained celebration it is today?

Modern-day Thanksgiving celebrations still heavily rely on the myth of the joyous first Thanksgiving feast between the Pilgrims and the Wampanoag tribe. However, it is important to know the true context from which this holiday was born to help prevent further erasure of the injustices inflicted upon Native Americans. While this does not make up for the past, it is certainly a step toward recognizing the oppression indigenous tribes have faced, and still face today. 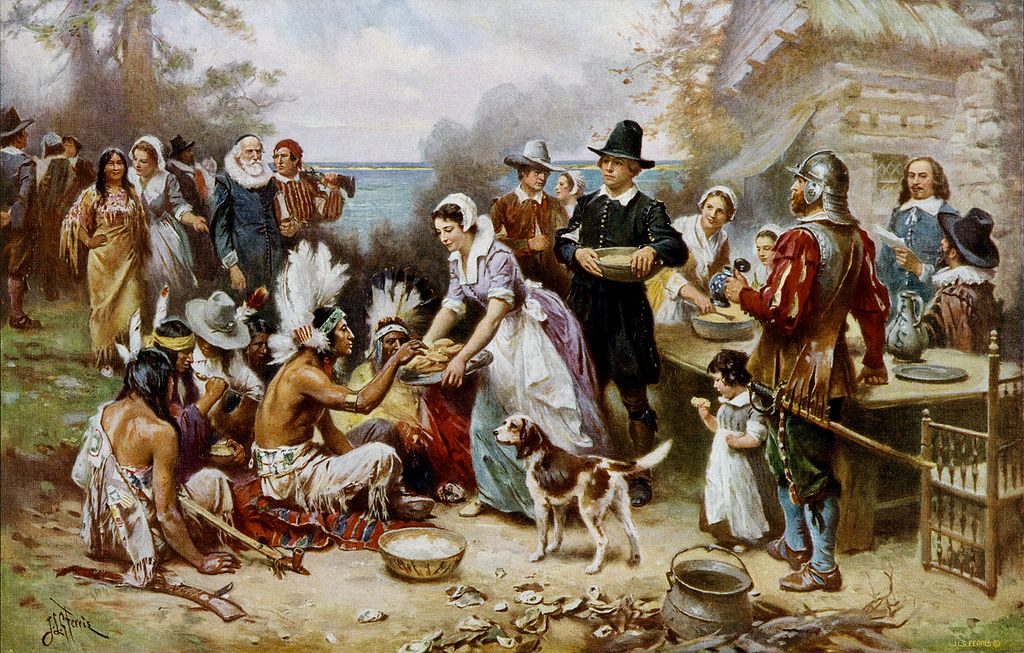 “The First Thanksgiving” by Jean Leon Gerome Ferris, which depicts the romanticized version of the holiday.

The common knowledge of the holiday depicts the first Thanksgiving as a harmonious meal between the Pilgrims and the Wampanoag tribe in 1621. The Wampanoag extended aid to the Pilgrims, who were near starvation, by bringing them much-needed supplies and teaching them how to grow their own crops. To commemorate their alliance and an abundant harvest, the Pilgrims invited the Wampanoag to a three-day celebration.

This, however, is a misrepresentation of the true history behind Thanksgiving. Although the feast did take place, the situation was quite tense. The two groups were distrustful allies who partnered up out of necessity. The Wampanoag needed more people to defend against other tribes; the Pilgrims viewed the Wampanoag as uncivilized, but were at great risk of dying out without aid. An influx of colonizers and a change in leadership on both sides ended the temporary peace. After the relationship dissolved, the possibility of fostering similar peace treaties squickly soured.

Increasingly, historians are pointing to a much darker event as a precursor to Thanksgiving: the Mystic Massacre. The Mystic Massacre was the culmination of the Pequot War, a three-year struggle with colonists over the tribe’s land. In 1637, Puritan forces and their Native allies launched a surprise attack on the Pequot tribe as they celebrated their own Thanksgiving in present-day Mystic, Connecticut. Colonial forces surrounded the Pequot tribe’s enclosed settlement and set fire to it, effectively trapping and murdering the people inside, from warriors to children.

The Mystic Massacre and two similar bloodbaths decimated the Pequot tribe. Surviving members were either sold into slavery or assimilated into neighboring tribes. Massachusetts Bay Governor John Winthrop expressed gratitude for the successful destruction of the tribe, and thus every massacre thereafter was subsequently followed by feasting and giving thanks.

In 1789, under the new US constitution, George Washington issued the Thanksgiving Proclamation, but the holiday was only recognized in the New England states for many years. Sarah Josepha Hale, an author and editor most famous for writing “Mary Had a Little Lamb,” started a campaign to have Thanksgiving recognized as a national holiday in 1827 by sending letters to the president, starting with Zachary Taylor. Her efforts paid off with Abraham Lincoln. Seeing an opportunity to unify the country in the middle of the Civil War, Lincoln declared Thanksgiving a national holiday in 1863. Although the Civil War would not end for another two years, Thanksgiving entered the public consciousness as a moment when two opposing factions could peacefully come together. 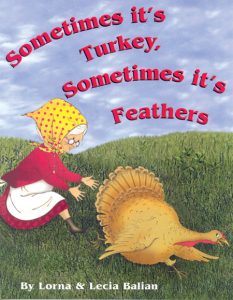 Similar to many aspects of modern-day Thanksgiving celebrations, turkeys did not rise to prominence until fairly recently. This particular tradition also came about thanks to Sarah Josepha Hale. In 1854, Hale heard the journal of William Bradford, former governor of Plymouth Colony, had been rediscovered. She became fixated on one innocuous sentence about the Pilgrims hunting wild turkey in the fall. Eating turkey for Thanksgiving was never stated in Bradford’s account, but Hale began publishing recipes for roasted turkey in conjunction with the holiday and the pairing gained in popularity.

Turkeys are now synonymous with Thanksgiving, but what if the turkey you want to eat is your friend? In Sometimes It’s Turkey, Sometimes It’s Feathers, written by Lorna Balian and illustrated by Lecia Balian, Mrs. Gumm raises a turkey to eat on Thanksgiving, but her plans go awry. This twist on tradition will help children understand one part of modern-day Thanksgiving customs. Next time you and your family are at a Thanksgiving dinner with a roasted turkey on the table, take a moment to remember the long history of this holiday.