The earliest origins of this mythical creature are thought to date back to before the arrival of the Celts in Ireland. Some scholars speculate that leprechauns were originally linked to “faerie forts” and “faerie rings,” small mounds of earth with unknown origins scattered throughout Ireland. At some point in history, the leprechaun morphed into its own entity, distinct from the other fairy beings of Irish folklore. These early leprechauns were characterized as little old men and were thought to be shoemakers or cobblers for these fairies. 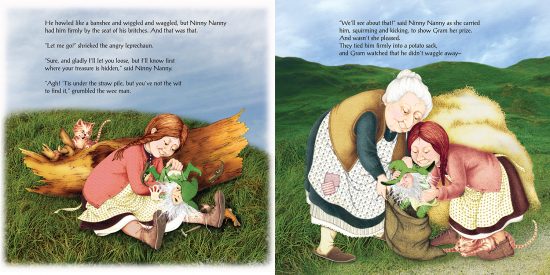 The legend of the leprechaun soon came to describe these supernatural beings as “crotchety, solitary, yet mischievous creatures”—diminutive shoemakers who hid the gold they made from their labors in a pot at the end of a rainbow or scattered throughout the mountains and forests. Additionally, leprechauns were originally thought to wear red, and only in the twentieth century did the image of the leprechaun change to a figure in green, coinciding with a general shift in associating the color green with anything Irish.

Today, leprechauns in popular culture are perhaps not as cranky, yet they still maintain a reputation for mischief. In Lorna Balian’s Leprechauns Never Lie, Ninny Nanny and Gram are in a bad state—the rain barrel is empty, the potato field needs digging, and all they have for food is rainwater soup! Yet, Ninny Nanny is lazy, so she decides to catch a leprechaun and find out were he has hidden his pot of gold. But finding the leprechaun’s fortune turns out to be much more than Ninny Nanny and Gram bargained for. The leprechaun leads them on a merry chase throughout their farm—all with the best intentions!

Have fun building and decorating a trap, but don’t forget that leprechauns are mischievous and smart creatures, so you never know what to expect!