The holiday season is in full swing! Houses are decorated with festive lights, stores have holiday gifts front and center, and a feeling of cheer seems to float in the air. December is an important time as it has many holidays for people of all different backgrounds and beliefs. So, as you gear up for the holiday(s) of your choice, here is a guide to some December celebrations around the world.

Hanukkah, or the “festival of lights,” kicks off the December holiday season. According to the Jewish calendar, it begins on the twenty-fifth day of Kislev and is observed for eight days, which in 2018 is December 2-10. The holiday came into being when Jewish rebel warriors defeated invading Greeks. They sought to rededicate their desecrated temple, but there was only enough oil to light the menorah for one day. Miraculously, the oil lasted eight days. In celebration, a menorah is lit, one candle each night, until all are kindled on the last day. The importance of oil is also celebrated with customary fried foods like latkes (potato pancakes) and sufganya (jelly-filled doughnuts). Children play with a dreidel, or a four-sided spinning top, and receive Hanukkah gelt, or money, from older relatives.

Bodhi Day falls on December 8. It celebrates the day Siddhartha Gautama, or Buddha, attained enlightenment. Gautama, a prince of Nepal, left his luxurious lifestyle to seek the meaning of life upon seeing the suffering of human beings. After years of traveling and seeking, he sat under a Bodhi tree with a vow to fast and meditate until he found the answer. On the eighth day, he came to a number of realizations that would become the foundational principles for Buddhism. Celebrations of Bodhi Day vary widely between sects and can range from visiting shrines for additional meditation to performing kind acts and decorating the family Ficus tree, the species to which the Bodhi belongs. Rice and milk play an important role, as this was the first meal Siddhartha was offered following his enlightenment. Some families also make heart-shaped cookies like the leaves of a Bodhi tree.

Pancha Ganapati is a modern Hindu festival celebrated December 21-25. Created in 1985 by Sivaya Subramuniyaswami so Hindus could have something to celebrate during the Christian-dominated holiday season, the festival centers on Ganesha, the elephant-headed god of beginnings, knowledge, culture, and the removal of obstacles. A shrine with Ganesha at the center is created in the living room. Children dress the statue in a different color each morning to correspond with that day’s color and theme. The first day, for example, is yellow and celebrates family. Offerings are made to Ganesha, and children open gifts on the fifth day.

Kwanzaa, celebrated from December 26 to January 1, is another modern holiday. It was created in 1966 by Dr. Maulana Karenga, an activist and professor of Africana studies, so all black people could have an alternative holiday to celebrate. Inspired by the “first fruit” harvest festivals in Africa, Kwanzaa is guided by seven principles (Nguzo Saba) that are the basis for strong community. One such principle is ujima, which means collective work and responsibility. Seven candles (Mishumaa saba) represent the principles of the holiday, and a candle is lit each day to celebrate the respective principle. Seven symbols are also used to decorate and represent Kwanzaa. Children receive gifts on the last day.

Omisoka (Japanese New Year’s Eve) was traditionally celebrated on the last day of the lunar calendar, but since switching to the Gregorian calendar now falls on December 31. This holiday centers on preparing for the clean slate of the New Year, while concluding the current year. People spend the day cleaning the house, decorating, paying off debts, bathing, and cooking large quantities of osechi, or traditional Japanese New Year foods. It is considered unlucky to cook in the kitchen or handle errands for the three days following New Year’s Eve, so it is important for people to complete the tasks before the end of the current year. Right before the end of the year, people gather to eat toshikoshi soba or toshikoshi udon. These long noodles represent long life. At midnight or in the following few days, people visit Shinto shrines or Buddhist temples for Hatsumode, the first shrine visit of the year. Amazake, or sweet sake, is traditionally passed out to crowds praying at the shrines. 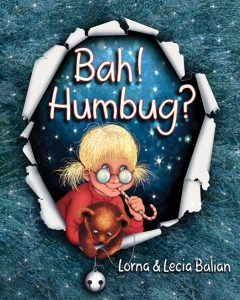 Christmas is the most widely recognized December holiday, and as a result, Santa Claus has become an instantly recognizable symbol. Mall Santas aside, there is a real one that comes around with presents for all the nice children . . . right? In Bah! Humbug by Lorna and Lecia Balian, Margie’s older brother does not think Santa exists, and he sets out a Santa trap to prove Margie wrong. But a little holiday spirit can go a long way.

From all of us at Star Bright Books, happy holidays!