Sixty years ago, the peregrine falcon was on the verge of dying off in the United States. At the time, dichlorodiphenyltrichloroethane (DDT) was widely used as a pesticide for both agriculture and households, and it proved to be poisonous to many forms of wildlife, including fish, bald eagles, and falcons. DDT was especially harmful to apex predators because the chemicals accumulated internally as infected animals were eaten. DDT also caused falcon eggshells to thin, leading to higher rates of broken eggs.

It was not until biologist and conservationist Rachel Carson that these issues became known. Her book Silent Spring exposed the harmful side effects that pesticides such as DDT had on the environment. Although Carson’s findings were initially dismissed or criticized, John F. Kennedy’s Science Advisory Committee eventually investigated and confirmed the truth of her book, leading to policy changes.

With the ban of DDT  and the passing of the Endangered Species Act in the early ’70s, the peregrine falcon population finally had a chance to recover from years of decline. A captive breeding program was put into place to help boost the dwindling population. But another issue arose when it came time to release the fledgling falcons into the wild. Because they were not yet fully mature, the falcons were vulnerable to a number of predators, including owls and foxes. In order to survive, this was not a gamble the species could afford. 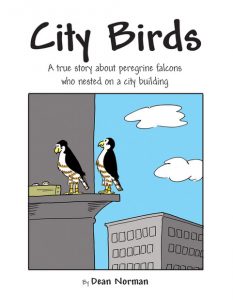 Then, researchers came up with a radical solution inspired by history. Falcons have been documented nesting in cathedrals and towers as far back as the Middle Ages. In hopes that an urban environment would present fewer threats to growing falcons, researchers garnered the support of government agencies, environmental groups, and the public to introduce the birds to their new homes. The captive birds were released on high-rise buildings in various cities across the US, particularly in regions where the falcon population was especially low. By the mid-1980s, the falcon population had slowly, but steadily, increased. Driven by this success, researchers continued releasing falcons into cities.

Eventually, high-rise buildings became homes for more than just captive bred falcons. Wild falcons were also able to adapt to changing landscapes and rapid urbanization by settling into cities. This adaptability is attributed to similarities in habitat. Falcons outside of cities often nest on cliff edges, a habitat well mimicked by tall structures like skyscrapers and bridges. Moreover, falcons mainly feed on medium-sized birds such as pigeons, which are abundant in urban areas.

As well as peregrine falcons have taken to urban areas, the unnatural environment does present threats and challenges not found in the wild. Falcons are not nest builders, preferring instead to dig a hole in which to lay eggs. Since this is not possible on a human-made structure, nesting boxes must be provided to keep eggs from rolling off buildings. Falcons are also particular about nest disturbances. Anything from helicopters to construction—and even nearby human activities—could prevent a successful nesting. Young falcons just spreading their wings also face the possibility of falling off structures without the updraft winds found at cliffs to help them learn to fly. The falcon population has an effect on humans as well. In some cities such as New York, which is home to about 40 falcons, they can interfere with construction projects due to their territorial nature.

Despite the challenges, peregrine falcons have made an astounding comeback and have even become a shining example of urban wildlife. Today, peregrine falcons are no longer endangered; they are now classified as a species of least concern. Their success story can hopefully serve as a model for the rescue efforts of other species on the brink of dying off.

Is your city home to peregrine falcons? In City Birds, two falcon hatchlings named Stars and Stripes call a skyscraper in Cleveland, Ohio, home. The humorous story follows the two young birds as they learn to navigate the real-life challenges of their big-city home.